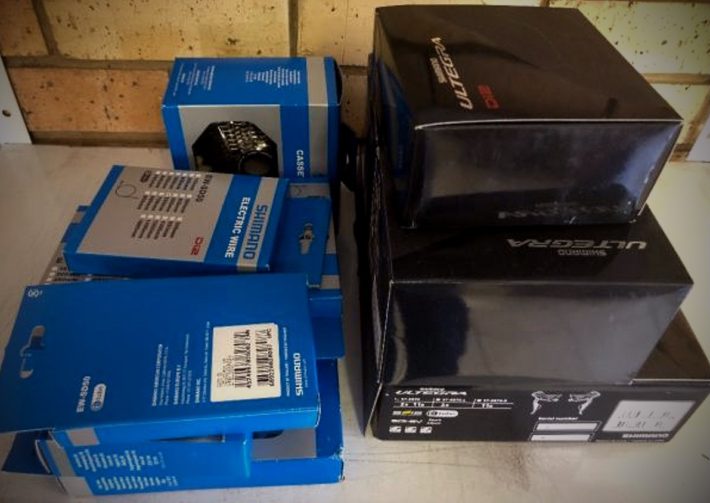 Building a new bike is a lot of fun, but can also be a bit of a challenge. How do you decide which Di2 components to buy? And which wires? What length? How many? Where will you place the junction boxes? Will you use a front derailleur or not? This post discusses your options and what to consider when making these decisions.

What parts do you need?

Before deciding what length and how many wires you need let’s first think of the parts that’ll be on the bike. Generally a Di2 build consists of the following parts:

You may have read about this before, but it’s worth repeating: you can mix and match components across series as you see fit. There are only a few limitations: don’t mix mountain bike / road derailleurs and don’t mix 10-speed and 11-speed derailleurs. Make sure you follow the Di2 Compatibility Charts and you’ll be fine.

There won’t be many Di2 builds without a rear derailleur (what’s the point in having Di2 if you don’t have a derailleur), but more and more people choose not to use a front derailleur.

You’ll see this on mountain bikes and gravel bikes a lot and there will be a couple of road cyclists running a 1x-setup as well. If you are using a front derailleur make sure you get one that fits your frame. You can buy both braze-on and clamp versions, so check which one you need.

Shimano mountain bike shifters and brake levers are separate parts, so if you’re building a mountain bike without front derailleur you’ll only have to buy one shifter.

On a road / gravel bike this is a bit more complex. Shifters and brake levers are generally combined in one piece of hardware, a Shimano Total Integration (STI) lever.

This means that even though you may not need a front derailleur, you will need two brakes and therefore also two STI levers. If you’re on a tight budget you could choose to buy one Di2 STI and a cheaper non-Di2 STI, but obviously it won’t look as good as having two identical levers.

We recommend placing your battery internally. Since charging happens through the port on the junction box you will never need to access the battery directly, so put it somewhere nice. Most users put the battery in their seat post, but other options are available too (fork, stem, top/down tube) depending on the choices the frame manufacturer made.

Whatever your bike type, you will need some kind of junction A to connect all the components to each other. While you can mix and match as you see fit, the recommended junction A differs per bike type.

On a road bike you’ll most likely use the traditional below-the-stem external junction A (SM-EW90) or the newer handlebar/frame mounted junction box (EW-RS910).
The functionality of both components is exactly the same, but they differ in the amount of e-Tube ports they offer. The SM-EW90 comes in 3-port and 5-port versions while the EW-RS910 only comes with 2 e-Tube ports. The latter is generally used with the JC130 Di2 Y-Connector cable, because it connects both levers to the junction box using only one e-Tube port.

While you could run the road/gravel junction SM-EW90 most riders will choose to use the XTR SC-M9051 or XT SC-MT800 System Information Display. These units feature 3 e-Tube ports, a display showing your gear, battery status and shift mode. They also support wireless communications between the Di2 system and your computer/head-unit.

It is possible to build a Di2 system without a Junction B, but this involves running e-Tube wires from Junction A to both the battery and derailleurs, as well as the shifters. This means you’d need to have two or three long wires in your down tube (FD, RD and battery), or move the battery to your fork, stem or top tube.

The more practical approach is to include a Junction B and run one e-Tube wire from Junction A to Junction B, which then connects the front derailleur, rear derailleur and battery to the rest of the system.
Like many other parts you can get an external or internal version, depending on what will fit your frame.

You’ll need at least three (Shifter -> Junction A -> Battery / Rear derailleur) EW-SD50 electric wires to build a Di2 system. Most setups will use a more sensible set of five or six wires.
Apart from the EW-SD50 there’s also the EW-JC130 Y-connector and EW-JC200 inline-port to help you connect all the components. Note that if you’re considering using the JC200, also look at the EW-WU111 – it’s about the same size and also adds wireless communications.

So, have you decided what components you’ll buy? You’ll have to decide on the Front and Rear derailleurs yourself, but other components are used in almost every build. We’ve added shopping links to these components for your convenience. For any others, have a look at the hardware overview page.

Next: Bringing it all together

Now that you have selected all of your components it’s time to connect all of them to each other. We published a post on that right here: building a bike – cable routing, putting it all together.