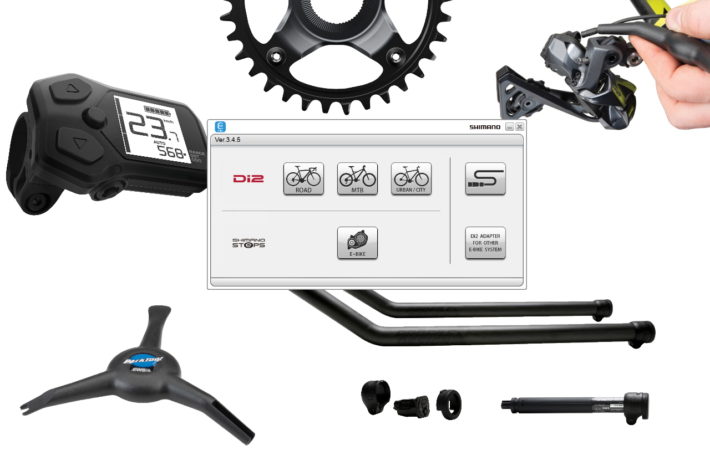 I usually do not write news posts, but this week there is actually quite a lot of Di2 related news..

Not only have a couple of new products been released and announced, I’ve also intentionally broken the firmware on a front derailleur. While the post on that is not ready yet, the video is – it can be found at the bottom of this post.

Last week Profile Design posted their new Aeroport Adapter. This product allows you to use the EW-RS910 bar-end Junction A in one aerobar extension and hide the internal Di2 battery (BT-DN110 / SM-BTR2) in the other.

Normally you’d hide the EW-RS910 in the bar-end (drops) but if your bike does not have any drops then this could be a challenge. That’s where this new product comes in. It’ll fit the Profile Design aluminium extensions and also the carbon 35c+ extension (35a, 45/25a, 50a, 35c+).

My commuter bike actually has a set of Profile Aerobar extensions – but no Di2. I will probably take a closer look at this product later this year, when I add Di2 to the commuter.

It costs $38.99 and can be found in the Profile Design shop and Amazon (affiliate link: more info).

The new SC-E5000 unified cycle computer display will be of interest to those of you that have been using this site to help build your STEPS E-Bike. It has integrated buttons that’ll let you adjust the STEPS assist level and its other buttons allow you to navigate menus or toggle lights on/off.

At the time of writing the E-Tube Compatibility Charts have not been updated yet, but the productinfo page has. The display is said to work with existing systems, by the way:

The unit is set to hit the market summer 2020 and I bet there will be some firmware updates to make existing components compatible with the SC-E5000.

More information on this Shimano page.

It may look like a late april fools joke, but this thing is real. I’ve tried to get my hands on an EWS-1 over here in Europe, but so far no luck. This three way tool features two ends that’ll help installing and unplugging E-Tube wires. The third end is meant to open coin cell battery covers.

Whether or not the tool is actually easy to use remains to be seen, but I’ll let you know when I get one. Have a look at Park Tool’s website or the video below if you’re interested.

The US price is $11.95 – European prices are unknown at this point.

A while ago I bought an SM-PCE02 and I wanted to use that to restore component firmware – just to have experienced the process at least once. I had just one little problem.. I had no component that needed to be restored.

In order to fix that I decided to update a component using the SM-BCR2 charger, unplug it during the firmware update and make it fail. That way I should end up with a corrupt component.

This took me two tries.. when I unplugged an ST-R8070 Shift lever at 50% it had actually already updated the shifter. On my second attempt I updated an FD-R8050 Front Derailleur and took out the E-Tube wire a lot sooner.

There will eventually be a full post on this, but in the mean time you can watch me go through the entire process in this Youtube video:

And yeah.. the video itself says BetterShifting.com, not Di2Center.com. That’s because the site will be moving to BetterShifting.com within the next two months. The content will stay exactly the same, but it will look a lot better and perform better on mobile devices.